What is a vector graphic and what makes it important?

What is a vector graphic and what makes it important?

A vector graphic is a computer image that is created as lines rather than a series of dots. This allows it to be rotated or proportionally scaled.

Unlike JPEGs, GIFs, and BMP images, vector graphics are not made up of a series of dots (known as pixels).

Instead, vector graphics are comprised of paths, which are defined by a start and end point, along with other points, curves, and angles along the way. A path can be a line, a square, a triangle, or a curvy shape.

These paths can be used to create simple drawings or complex diagrams. Paths are even used to define the characters of specific typefaces.

Because vector-based images are not made up of a series of dots, they can be scaled to a larger size and not lose any image quality. If you enlarge up a raster graphic, it will look blocky, or “pixelated.”

When you enlarge a vector graphic, the edges of each object within the graphic stay smooth and clean. This makes vector graphics ideal for logos, which can be small enough to appear on a business card, but can also be scaled to fill a billboard.

When it comes to printing

Vector art is ideal for printing since the art is made from a series of curves, it will print very crisply even when resized. For instance, one can print a vector logo on a small sheet of copy paper, and then enlarge the same vector logo to billboard size and keep the same crisp quality.

A low-resolution raster graphic would blur or pixelate excessively if it were enlarged from business card size to billboard size. 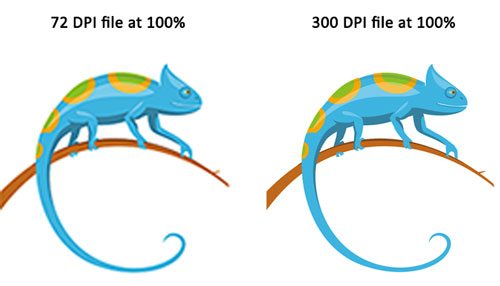 MORE POSTS FROM THIS CATEGORY...

Why you need a professional web hosting service

August 7, 2018Without a web hosting service, nobody will be able to find your website because it has no place to live. Web Hosting is a service that allows you to launch your website on the World Wide Web. The data from your site is then hosted and stored on physical servers by your hosting company. When […] READ MORE

August 4, 2018Creative Imagery is passionate about empowering businesses with the knowledge and know-how to succeed online.  Our no obligation, Free Website Audit will give you an overview of your website’s performance. There are many different elements that must all work together to produce an effective website. As part of our website audit, we’ll assess:   How […] READ MORE

July 27, 2018When it comes to explaining what corporate branding is, we have to break it down into there main areas: Logos, brands and identities. A logo is for… identification. It identifies a company or product in its simplest form via the use of a mark or icon. A good logo works in the simplest form. It is […] READ MORE
Copyright © 2017 Creative Imagery | Web Design Perth     DISCLAIMER
0
Connecting
Please wait...
Send a message

Sorry, we aren't online at the moment. Leave a message.

We'll get back to you as soon as possible.
Login now

Help us help you better! Feel free to leave us any additional feedback.

How do you rate our support?
Reviews ★